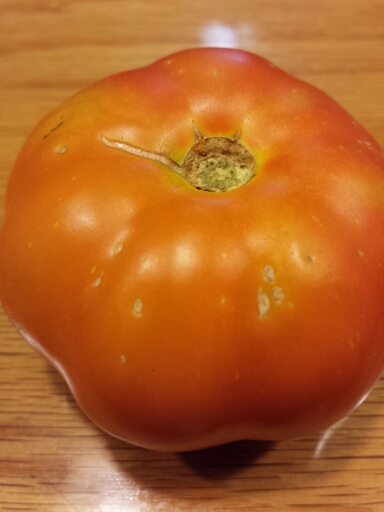 There is something wrong with my tomatoes!

The one in the picture above looks pretty mild compared to some of the other beefsteak tomatoes.  Several of them have had really deep, dark, and dry-looking grooves on the tops and they also have holes in them, some small and some large.  However, the leaves are pretty much in tact.  I think it might be the case of a worm (tomato worm, horn worm, pin worm) which means I have to go out there and have a closer look.   This is the part that I DO NOT like about gardening.  Creepy crawlies?! And especially WORMS?!  Oh, dear!

I was hoping I could snap a clearer picture, but I had to be fast before something landed on me.

I’m also getting powdery mildew on the leaves of my squash plants.  The fruit itself is fine, but the leaves have this unpleasant look about them.  This condition has affected the zucchini (also infected by stem borer pests), the cucumber plant, and now the butternut squash.

Plants get sick, too!  Looks like I need to find out the cure for these ailments.